Brexit is the 2019 Oxford Children’s Word of the Year.

Each year, the Oxford Children’s Dictionaries and Children’s Language Data team at Oxford University Press analyses the short stories entered into BBC Radio 2’s 500 Words competition to reveal a wealth of fascinating insights into children’s evolving use of language.

A whopping 112,986 children entered the competition this year, and British children have once again shown themselves to be witty, inventive, and astute.

The national focus on Brexit has been a major topic for young writers to address, and while it may seem unsurprising in a year of news dominated by the issue, the stories that used it as a hook were anything but!

Brexit was identified as our Children’s Word of the Year not only because of its significant increase in use (a total rise of 464% since 2018), but also because of the political and social awareness that children demonstrated in their stories and the incredibly inventive hooks and ways in which it inspired children to write about finding solutions to Brexit.

A number of children reference Brexit as a boring subject adults “bang on about” in their stories:

They had had enough of politicians arguing about Brexit. The boring subject that invaded every news channel.

But, this year, many more were inspired to swoop in and become proactive problem-solvers, with imaginative story titles – replete with weird and wonderful plot lines – such as:

What I might do is help Mrs. May sort out Brexit. No need to recall parliament, I’ll sort out a deal. I’ll discover what the Irish backstop actually is – job done! Everyone’s happy.

Words and political figures associated with Brexit also show an increase in usage, demonstrating children’s engagement with the news and the media. Mentions of European Union, backstop, trade deal, and prime minister all increased, and Theresa May made the list of top 10 famous people for the very first time.

‘You can have your Brexit deal’, said Tusk nibbling at his cake, ‘but please, can I be in the Great British Bake Off? Baking has really been my only passion! I don’t know why I became the European Union leader!’

Children have also been playing with blends to create new words improvised around Brexit such as clexit (the class leaving the school), frexit, wexit, and plexit (the ‘exit’ of fruit, wood, and plastic)!

Brexit is, unsurprisingly, a huge theme in the stories this year. What is an extremely complex and difficult issue for some of the finest political minds has inspired children’s creativity and inventiveness in a really interesting and smart way. In 2017 and 2018, Brexit was mostly referred to as a boring subject parents talked about in the background. This year, however, it is a very different picture: Brexit is front and centre of the action, with children swooping in to help Theresa May in a proactive, empowered, and fun way. This year’s stories show an overwhelming desire among children to take action and create positive change at home, at school, and in society more generally. Agency and empowerment are massive themes. 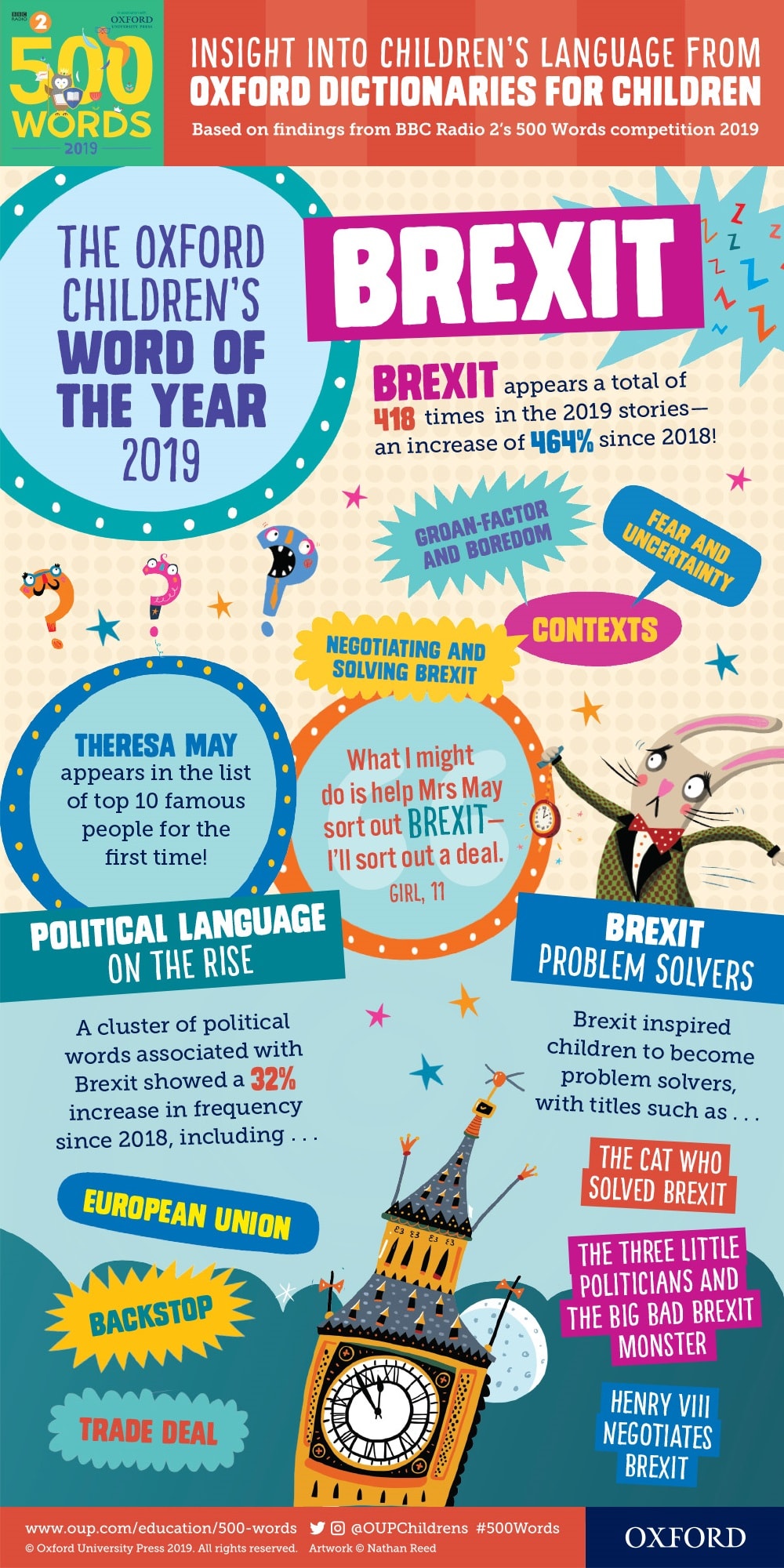 Concern for the environment seems to have grown again in 2019, with an increase in mentions of climate change, global warming, deforestation, vegan, pollution, and plastic (the Children’s Word of the Year in 2018). Many stories are set in the future and imagine a planet that has suffered catastrophic environmental damage as a result of climate change.

The year was 2356. A lot had changed since your time. The world was collapsing, decaying. Climate change spread over our planet like a deadly disease, and then all that remained was one city.

Swedish teenager Greta Thunberg also emerged as a role model after she initiated a global campaign of school protests in February 2019 (right in the middle of the writing period), stimulating themes based on campaigning and activism.

With wide open-eyes, Poppy watched as the children who were not that much older than her marched to preserve the future of the Earth.

Increased use of the words veggie, vegetarian, and vegan also reflect the national trend towards adopting a more plant-based diet:

But the truth is, I actually like being helpful and I don’t like eating grannies or blowing down houses. You might be surprised to hear that I don’t even like eating meat – I am a vegan wolf! 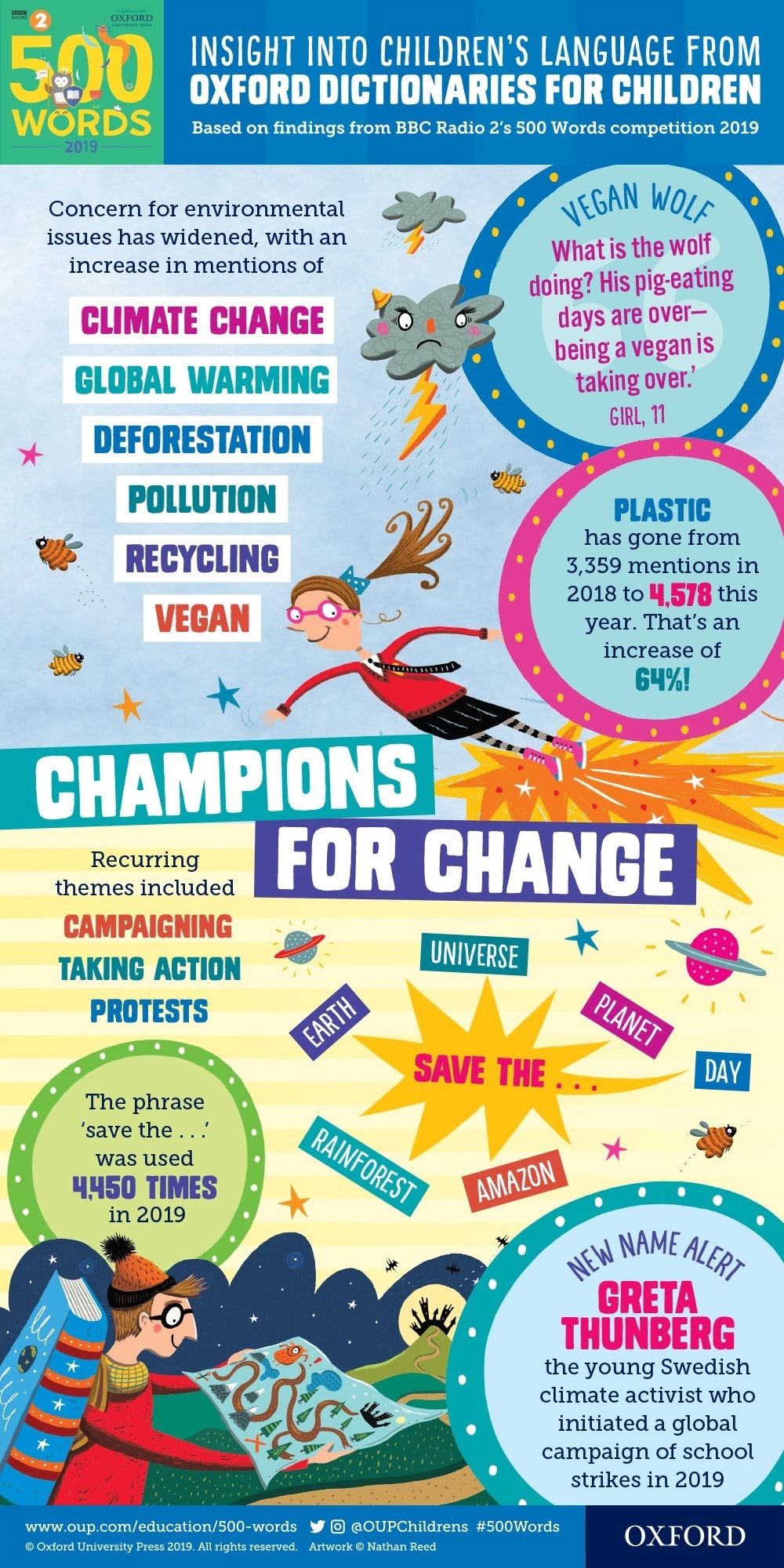 I love how the analysis of Radio 2’s 500 Words entries is able to uncover so much fascinating information about the stories. The research shows just how aware and engaged kids are with history and the world around them today, and how amazing they are at bringing these subjects to life in inventive and entertaining ways.

OUP’s findings are such a unique insight into the creative minds of children today, showing the many points of reference and the different themes that inspire them each year. I’d like to thank OUP for their brilliant work analysing the language in the almost 113,000 stories submitted to 500 Words this year.

For more information on the findings and a unique insight into children’s language in 2019, download the full report and take a look at the infographics on the Oxford University Press website. 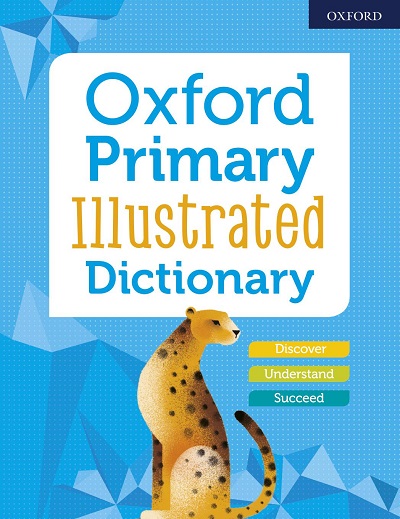 This brand new dictionary is crammed with features to get children aged 7+ discovering words and boosting their vocabulary range.

With entries from across the curriculum, clear and accessible definitions, a mixture of illustrations and photographs, help with alphabetic navigation for tricky letters, interesting word origins, examples from well-known children’s books, synonyms and antonyms, it will help children discover lots of exciting new words and meanings easily.

500 Words might be over for another year, but that doesn’t mean that it’s time to put down your pens!